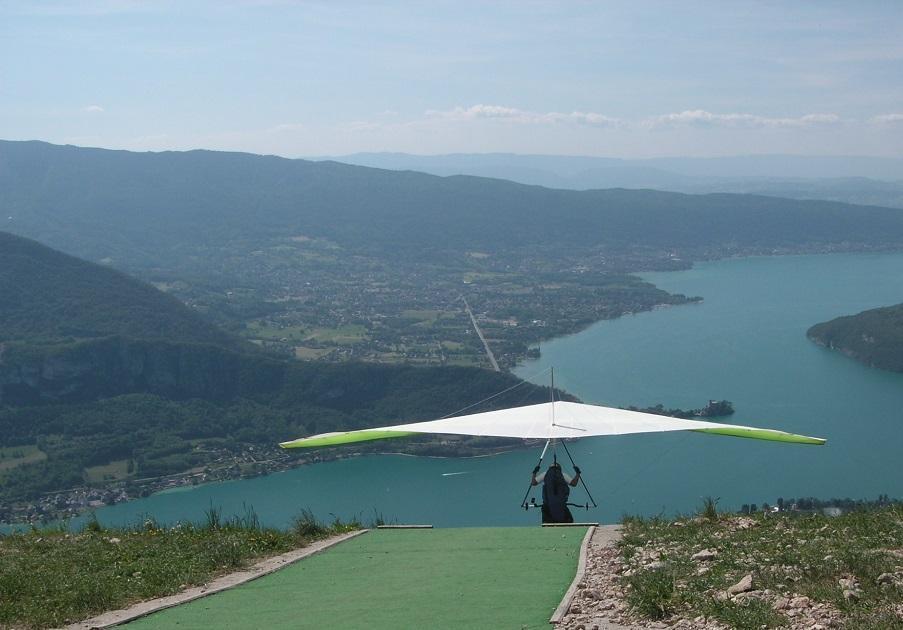 Paragliding in France – Gravity, who needs it?

Gravity is greatly overrated. Unless you are film star Sandra Bullock and stand to make a lot of money floating around in your undies, gravity can be a tiresome force. Well, it does keeps our feet on the ground but who has not dreamed of being able to fly? What a wonderful sensation to feel the rush of air on the face, free as a bird, floating effortlessly above the earth, catching the breeze, diving down then swooping again, surfing the thermals, flying high…

France became the birthplace of the modern craze for paragliding when in 1978 a group of enthusiasts got together in Meuissy, in the Haute-Savoie, and calculated that if you ran down a slope with a square parachute it would inflate and you could take off. This was called parapente, “pente” meaning slope. This town then became the Mecca for the sport which rapidly spread across the world.

We have to go back in history to find its origins. The fascination with flying begins at an early age, every child has run around the garden, arms outstretched, hoping to take off. Over the centuries man has invented various devices and machines in order to achieve this end. The first record of a type of parachute goes back to the 15th century in Renaissance Italy where Leonardo da vinci, among others, began designing structures of this type. The word paragliding is a derived from “parachute” coined by Louis-Sébastien Lenormand, its French inventor, in 1785, from the French prefix paracete, meaning to protect against, and chute, to fall.

The paraglider as we know it today did not appear until the 1950’s when Francis Rogallo did research for NASA to design a more controllable form of parachute for space craft. Thanks to this million dollar investment the world had a new hobby! Whereas a parachute’s circular design allows it to descend gently with a limited amount of control, the paraglider, with its oblong design and vents, enables the structure to be controlled and glide over greater distances.

So where is a good place to fly? With a hill or cliff to launch yourself off there are thousands of locations but it is stressed that you should never attempt to teach yourself and it is important to get weather advice from local clubs. Training is essential and the basic qualification is known as SIV, Simulation d’Incident en Vol (Simulated Incidence in Flight) or wing control. Most novices start with a tandem flight to get the feeling of takeoff and landing to give them confidence to go solo.

Among the five best sites in the world two are in France: Mont Blanc, being the highest point in Europe at 4,440m offers dramatic flights down the Chamonix valley for experienced flyers. For beginners or less experienced pilots, Planflait, near Annecy in the Haute-Savoie region is popular as the geography of the region allows launching with most wind directions.

However, the options are many and varied and this useful map shows you where you can combine your holiday with an exciting sport or interrupt your studies with an an inspiring flight. A tandem flight is a great gift for a special occasion too.

Needless to say the views are breathtaking, the sensation unique and you will be hooked from the first moment your soar up into the sky and take on the birds at their own game.