Whether we like it or not, there are some risks involved with our winter sports. Unsurprisingly, hurtling down a mountain can pose some threats.

But, if you’re anything like us, these dangers won’t stop you being first in the lift queue each season.

The best slope experiences are often the most dangerous! Venturing off-piste, attempting a black run, performing a stunt… It can be hard to stay safe out there!

So, how do you avoid the risks of skiing while getting the most out of the slopes? To try and help, we’ve put together a guide to safer slopes.

Here’s how to ski safely.

Sometimes, looks can be deceiving! It’s important to be aware of your surroundings no matter what slope you’re on.

Invisible ice, hidden stones, snowboarders sitting down – the list of potential threats is a long one. Here’s a closer look at how to avoid the risks of skiing:

Watch Out for Others

It isn’t advisable to collide with other skiers on the slopes. For fairly obvious reasons.

It’s always the other persons’ fault, right? But, the blame game doesn’t help when injuries are involved.

Snowboarders can’t be held accountable for every collision! So as not to aggravate the rivalry further, if someone is getting too close for comfort on the slopes, simply move away.

Get the Right Equipment

Ill-fitting equipment leads to injuries. Simple as that.

The list of injuries that affect skiers and snowboarders is a long one. So, take all necessary precautions. You don’t want your slope-time cut short!

Ski boots might not be fashionable, or particularly comfortable, but wearing ones that fit well is essential.

Adjusting your ski bindings correctly also helps prevent injuries. Having your skis fly off at all angles isn’t safe for those around you, either!

Your poles should be the right length, with your hands through the loops. Letting go off these should be avoided as much as possible.

While it can be tempting to cut costs by buying cheap equipment – premium, well-fitted equipment is available! Get the best of both worlds by using high-quality gear at affordable prices.

Also – always wear a helmet. This one needs no further explanation, we assume.

Be Prepared for All Outcomes

At high altitudes, the weather can be unpredictable!

In a short space of time, weather conditions can change radically. So, be prepared and dress for all eventualities. Think ‘dress for excess’ and you’re on the right lines.

Also, bear in mind that poor snow quality makes skiing more dangerous. If the snow is hard-packed or icy, it can be hard to get your grip. Plus, this will result in a much harder landing.

Unsurprisingly, there are more safety issues when venturing off-piste. Swapping the welcoming, well-groomed pistes for the tougher, less-travelled paths might be a uniquely thrilling experience, but it’s not one without danger.

While we commend your taste for adrenaline, don’t forget to put safety first.

If the forecast is predicting poor weather conditions, perhaps don’t head off-piste that day. There’s no shame in staying safe!

Prepare for all eventualities!

When heading off-piste, it’s important to be prepared for the possibility of avalanches.

Be mindful of the area you’re in:

Before venturing off-piste, it’s advisable to speak to some local professionals to pick up some safety tips. Learn from their mistakes, if possible.

Whether they’ve taken your exact route or not, there’s no harm in asking for advice! Chances are, they’ll have many help hints to see you mastering off-piste routes as safely as possible.

Before tackling off-piste slopes, make sure you’re well-stocked with safety equipment. Answer the call to adventure by taking precautions!

Transceivers, shovels and probes are all necessary items to help you brave the challenge of off-piste.

Have a Ski Buddy

Don’t go at this alone!

When skiing off-piste, it’s essential to go with at least one other person. The more the merrier in this case.

The freedoms of solo skiing might be tempting, but this isn’t an option for staying safe off-piste. This applies to everyone, no matter how good you are.

You may also like: How to Become a Solo Skiing Expert 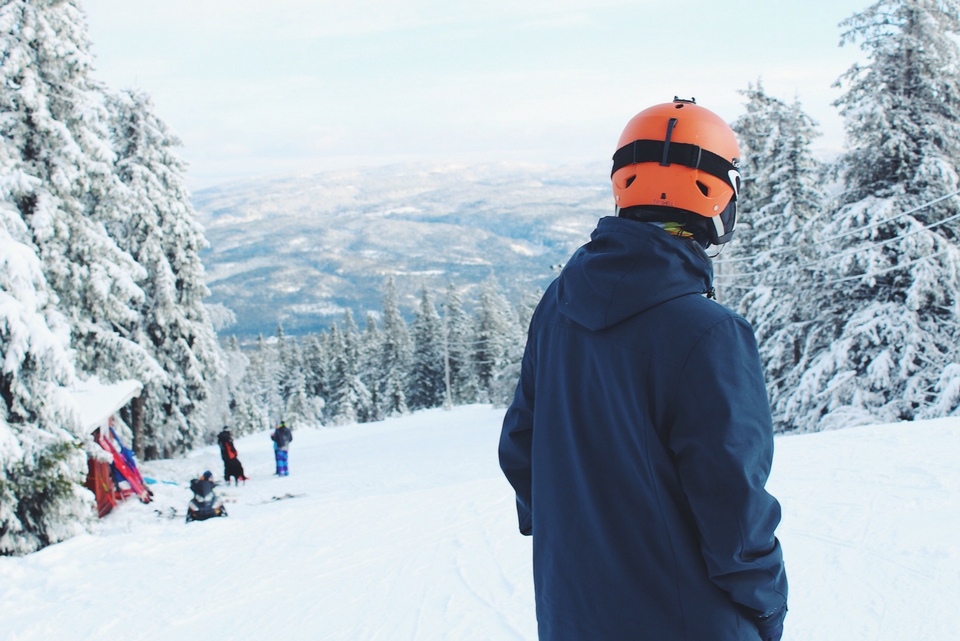 Don’t Over Do It

It’s tempting to show off on the slopes. This is an undeniable fact.

But, injuries tend to favour the arrogant skier.

If you’re preoccupied with showing off and pushing yourself to the absolute limits, chances are this will end badly.

Don’t attempt a slope if it looks too difficult for you! Plus, there’s no shame in taking a break and having a rest if you feel like you need it.

Always stick to your level and bear in mind your skills base. Knowing your limits will save you a lot of trouble in the long run.

Also, watch your speed. Hurtling down the mountain as fast as possible has its appeal, but isn’t advisable when we’re talking about safety.

Is Skiing Dangerous for Beginners?

If you’re new to the slopes, you might be unaware of the challenges they can pose.

In the early days, you won’t be venturing off-piste or hitting the black runs, which reduces the chance of danger. But, everything has its risks.

If you’re tempted to skip the ski lessons to save money and time, make sure you’re clued up on a few basics to make you safer around others.

Make sure you know how to slow down while skiing! This will help prevent you crashing into others, or simply looking ridiculous.

Carry your skis properly! Make sure the bindings are attached so you aren’t constantly dropping them.

Also, do some preparation exercises, such as squats and lunges, to get in shape for the sudden shock of the slopes. The stronger your muscles, the better you’ll be at skiing and the less likely you’ll be to hurt yourself. It’s a win-win!

Being Prepared for Ski Accidents

The pistes can be unpredictable!

In the unfortunate circumstance you encounter an accident, you’ll want to know what to do. It might be easier said than done, but, try not to panic. Instead, assess the situation.

Each situation will be different, but there are some basic steps to follow.

First things first, always call for help. Don’t try and do anything ridiculous like carrying the injured skier back down the mountain. There’s a time and a place for being a hero, and this is not one of them.

If you don’t have a phone, send one of your party off to get help.

Also, keep the casualty warm. Move them out of the way of any danger, and make them as comfortable as possible.

If you’re an adrenaline junkie, we strongly advise getting travel insurance.

Many policies will cover off-piste, which is great news for those who want an extra level of protection on the slopes.

So, before braving the half-pipes, make sure you’re wearing protective equipment.

We’re all guilty of having a little too much fun at après-ski. But, just try to remember you have to make it back down the mountain again.

If attempting skiing while drunk, perhaps stay away from the tougher runs for the rest of the day. This isn’t a rule, just a word of warning!

How dangerous is skiing? As dangerous as you make it! So, beware of poor decision making.

If you’re skiing alongside some younger travellers on their first ski trip, you’ll need to be aware of how to keep them safe.

While the nursery slopes are much safer, they still carry risks.

Getting your kids lessons is the best way to ensure they don’t hurt themselves on the slopes. Plus, this will give you more freedom to do your own thing.

Need a safe, reliable transfer to and from the airport? Alps2Alps offer an affordable service to every major resort destination in the Alps. Book your low-cost transfer here!